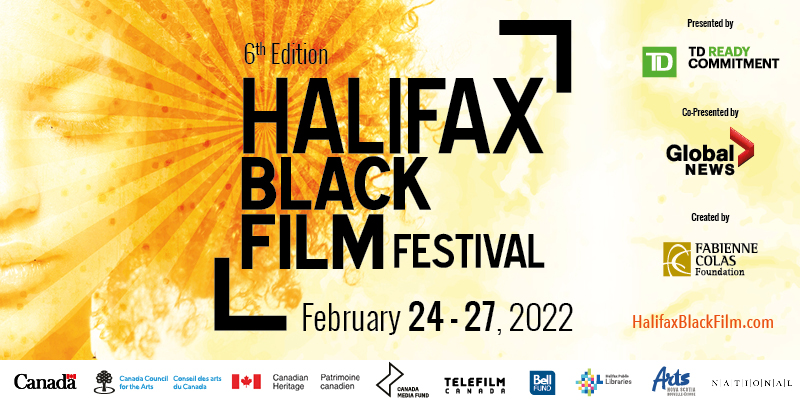 #HBFF22 will open on February 24 at 7pm AST with Desiree Kahikopo-Meiffret’s WHITE LINE, a period story of hope borne from love grown in a forbidding time. Then, as of 9pm AST, 73 films will be available entirely online. #HBFF22 will close with Enver Samuel’s documentary feature, MURDER IN PARIS; a political crime thriller that traces the motives for the assassination of anti-Apartheid activist, Dulcie September.

This edition’s highlights include the HBFF Documentary Series, presented by Canada Media Fund; The HBFF Black Market, Presented by Bell Fund and co-presented by the Halifax Regional Library; and Fabienne Colas Foundation’s Being Black in Canada, presented by NETFLIX, in collaboration with the National Bank, and supported by Telefilm Canada, the Canada Council for the Arts and various local partners.

Local Halifax filmmakers are spotlighted this year with Koumbie’s I HATE YOU, a narrative short about Joe and Megan having to go through a rejection before they can move on to breakfast; and Israel Ekanem’s narrative short, KILL YOUR MASTERS, about two black slave girls taking their destiny into their hands to liberate themselves from the shackles of their white slave master.

“We are proud to celebrate African Heritage Month with another impactful and powerful edition of the Halifax Black Film Festival! More than ever, HBFF is an important platform that celebrates Black talent and empowers filmmakers to create meaningful work. It is vital to bring awareness to current struggles so we can get inspired to become agents of change. Our aim is to connect members of all cultural communities through films, allowing us to better understand one another and to see the world through each other’s experiences.” – stated Fabienne Colas, President and Founder of the Black Film Festivals in Montreal, Toronto, Halifax, Ottawa, Calgary, and Vancouver

SPECIAL EVENT: Fabienne Colas Foundation’s BEING BLACK IN CANADA
Presented by NETFLIX, in collaboration with the National Bank, and supported by Telefilm Canada, the Canada Council for the Arts and various local partners.

BEING BLACK IN HALIFAX
Four filmmakers from Halifax tell their raw and relevant stories about of what it really means to be Black and living in Halifax. A poignant theme develops in this series. One that sadly reflects what is happening in our Black communities today. These films give us hope for the future during a time in our communities when that future feels bleak.

Along with the Halifax cohort, the 2021 participants of FCF’s BEING BLACK IN CANADA program from Montreal, Toronto, Ottawa, Calgary and Vancouver will also present their films. These young filmmakers benefited from mentorship and training by established experts across multiple areas of film production including screenwriting, directing, editing and production. Each documentary short addresses the issue of social integration of people from Black communities in Canada.

The #HBFF22 All Access Pass is available for only $49, giving access to the festivals entire programming. Individual film tickets prices range from $9 to $15.

The 6th annual Halifax Black Film Festival, created by the Fabienne Colas Foundation, is presented by TD Bank Group in collaboration with Global News from February 24 to 27, 2022.